Some of us have it and most of us may never get it. That’s acting talent we’re talking about, of course. Bernice Breckon certainly has it and we like seeing her act whenever we can. We saw her in a couple of feature films already and some short films too. One of the features we saw her in was that little film no one has heard of called, Avatar, Yes, we were just kidding, everyone’s heard of that blockbuster. Bernice was not only in it but she has an opportunity to be near James Cameron, the writer, director and producer of the film while they were filming in New Zealand.

Bernice was born and raised in that beautiful country so she’s been around a lot of great filmmaking in recent years. (Peter Jackson’s Lord of the Rings movies were shot in NZ also). When she saw Mr. Cameron work it must have inspired her a great deal because it was then that she decided to make acting a career instead of just a hobby. She went out and dove into acting classes and studied with the best of the best in her country and then swam the 2500 miles to Australia to study with famed teacher Denise Roberts at her Screenwise acting school. (We may have exaggerated Bernice’s swimming ability a bit. She could have taken a plane to Australia, we’re just not sure). 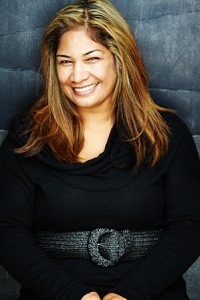 Bernice has performed in a lot of commercials and tons of stage plays. She’s produced, directed and acted in a bunch of short films and has performed in a bevy of feature-length motion pictures. She’s been Avatar, Find Your Voice and Fearless Games, to mention just a few of her feature film appearances. She directed the critically praised short, For The Love of Joseph, and produced several other shorts including, Fashion Statements and Deathly Acquisition under her company’s banner, iFlow Productions.

Ms. Breckon is a busy woman, indeed. When she’s not acting, then she’s either developing a project that she will produce and possibly direct. When she is in-between projects she hones her craft and art by attending classes and sharpening her acting skills. Bernice feels that to move forward you must constantly improve yourself in every way possible. She also believes that you are the writer of your own story so you must have the mindset to make it happen. Good advice.

Good songs excite listeners, But truly great songs open up a gateway into a world of sound where the parameters are defined by the imaginations of those making the music. Butta B-Rocka makes music that’s – funky, fresh, colorful, and playful. “Strange Luv” is an alternative pop-soul, melting pot of creativity. Butta takes you on […]