Last time we brought the story about the online-brawl between musical sensation EYEZ and the opposing Mr. CHRIS QUALITY.

We have come to learn now, that after having seen us report this SITUATION!!!  Mr. CHRIS QUALITY and his friend director/photographer who goes by the name JUGANOT_DA_BEAST have taken the liberty, to cyber-bully EYEZ, by creating and sharing a post online on, the instagram account of JUGANOT_DA_BEAST, in which, they have attempted to body-shame EYEZ, “ 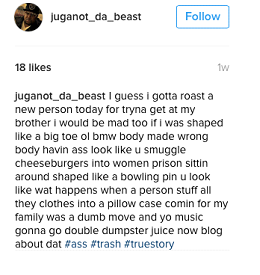 @juganot_da_beast ; I guess I gotta roast a new person today for tryna get at my brother I would be mad too if I was shaped like a big toe ol bmw body made wrong body havin ass look like u smuggle cheeseburgers into women prison sitting around shaped like a bowling pin u look like wat happens when a person stuff all they clothes into a pillow case comin for my family was a dumb move and yo music gonna go double dumpster juice now blog about dat #ass #trash #truestory”

Except JUGANOT_DA_BEAST does not know, that us bloggers, see all what he is saying, and basically shout out to my curvy LADIES, you know you shouldn’t work with a man like this; apparently he has no respect for shapes & sizes.

No real successful person in the entertainment business would have ever done this as a defence move, had they ever known how the tables have turned in the current world.

Yo, JUGANOT_DA_BEAST, have you not heard about the model Ashley Graham? If not, I believe ya better look it up , and educate yourself. The world is becoming ever so progressive but that does not say that we still have a few glitches like JUGANOT_DA_BEAST.
Having said that, @JUGANOT_DA_BEAST ‘s Instagram account, boasts a 1980 Followers and his IG feed consits mostly of memes and other funny posts,  the post aimed at EYEZ however, had only got 18 Likes, which is pretty much insignificant, and guess what? Creating and sharing a MEME about EYEZ only goes on to show, just how much important EYEZ really is, so much so, that you decided to feature her in you Instagram, and you decided to do so, by a childish move that you called “protecting your famlily” by creating and sharing a meme?! Really brother? Someone has some real growing up, left to do!

Oh and let me give you some FREEEEEEEE advice, by doing what you did, had our girl EYEZ taken action against you, dear Mr. JUGANOT_DA_BEAST, she could hold you liable for defamation, son!!!! BE CAREFUL.

And we have more to say, about Mr. CHRIS (not-so-much) QUALITY.
Yet again, aiming in defence at EYEZ reaction to his last shot at her, Mr. CHRIS QUALITY hasd this much to say; 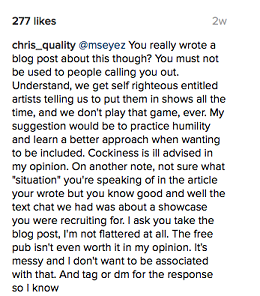 “ @chris_quality; You really wrote a blog post about this though? You must not be used to people calling you out. Understand, we get self righteous entitled artists telling us to put them in shows all the time, and we don’t play that game ever. My suggestion would be to practice humilty and learn a better approach when wanting to be included. Cockiness is ill advised in my opinion. On another note, not sure what “situation” you’re speaking of in the aritcle your wrote but you know good and well the text chat we had was about a showcase you were recruiting for. I ask you to take the blog post. I’m not flattered at all. The free pub isn’t even worth it in my opinion. It’s messy and I don’t want to be associated with that. And tag or dm for the response so I know. “

Oh there’s just SO MUCH wrong with CHRIS QUALITY’s statement, I don’t even know where to begin. Sigh….One, anybody reading my blog posts should know that I am an individual like who writes gossip articles about people in the entertainement business, like PEREZ HILTON does, I don’t know why you people keep assuming that EYEZ is writing this I mean hey! “We just want the credit when its due!” haha.
Two,  if CHRIS QUALITY’s suggestion is to practice humilty, why doesn’t he practice what he preaches? Let us not forget that he was the one to start up this whole (and I REPEAT) SITUATION!!! Mr.Chris Quality is the one who replied to EYEZ’s comment on the poster by @HELLA_FAMOUS, speaking of which, the event which was posted about by @hella_famous when checking the FACEBOOK event, it suggests that only 13 people have attended it! OUCH.
Three, if free publication, isn’t worth it, why would you arrange to have it in the first place sir?!?! Haha this is getting funny though.
Four, Mr. CHRIS QUALITY is asking EYEZ to either tag or DM her response to him, so that he knows about it, but we all know EYEZ is not boud to do it, AND if all this time EYEZ was not tagging CHRIS QUALITY but he still keeps this SITUATION going on, are we to assume that he’s been keeping tabs on every online account of EYEZ? Or how would he know, right? hahaha

In other news; there will be a FILM featuring EYEZ of which the title has not been released yet, you can find more information about it here;

You know what they say, that; HATERS ARE FANS IN DISGUISE.

S.till C.arry O.n is a talented music artist who has been releasing some exciting numbers and impressing his fans. He has come up with another exciting song I Found You Feat. Brother Mike. S.till C.arry O.n says “I am well rounded & extremely passionate about my craft. I’ve been an up & coming rapper for […]