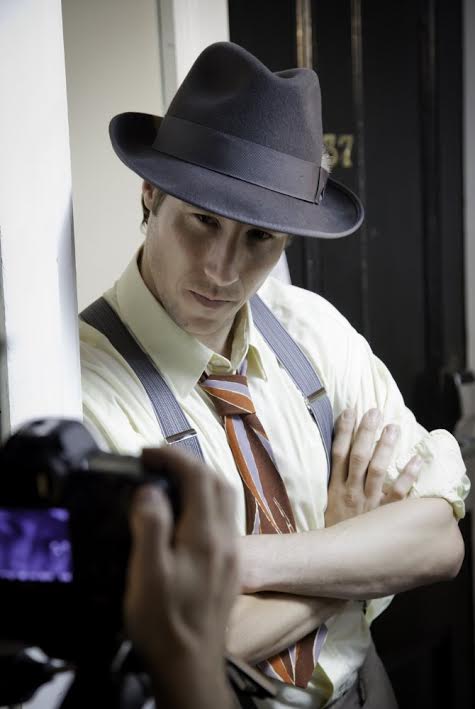 Michael Williams is a seasoned actor with an established career that is constantly moving forward. Michael, as an actor, is also constantly moving forward in new directions too, most recently as a writer and director. We just found out that he is going to direct his first feature-length movie in 2017. The film is called The Sacrifice and it’s about a retired bounty hunter who is strangely drawn to one last case.

He just finished directing a short film called The Fallen Salesman and we can’t wait to see it. Michael Edward Williams has been in numerous stage plays and over thirty films in Australia and the United States. He was in Sharkman, Ned Kelly, Just The Way It Is, Monster Pies, Only The Good Die young and Johnny Swade, to name but a few. As far as stage plays go, Michael has been in some real classics like, The Comedy of Errors, Death Of A Salesman, Glen Garry Glen Ross and Sexual Perversity In Chicago.

Michael was born in Melbourne, Australia and has loved movies since he was a kid. It seemed only natural to him that he worked at it for a living when he got older. And he does work at it – quite a lot. In fact, his schedule this year is one of his busiest ever. He has three features coming up that he’s acting in and a TV show. He’s also developing several other projects as a writer and director. For Michael, there is no slowing down and he doesn’t see any reason why he should, anyway. When he was working on the Aussie feature Ned Kelly, with the late great Heath Ledger, he got a chance to see true acting greatness. Michael only had a few lines but being in close proximity to Mr. Ledger let him see how a real professional worked. He learned a great deal just by absorbing what was right next to him.

Michael has some great advice for aspiring performers. He suggests that you be yourself and ‘back’ yourself, by which he means you need to support yourself emotionally because you may not find anyone else to do it for you. He also says to remember that you are unique and beautiful and that you should trust yourself. Don’t be afraid to fail because you never learn from the wins in life. We always learn the most from the mistakes we make and they will only sharpen the characters you play as an actor.

SHHHHHHHHHHHH!!!!!!! Don’t tell anyone!!!!!! JUST BETWEEN US Got somethings on your mind: Relationships, affairs, guilt, conflicts, marriage or divorce issues? Anger, shame or guilt Is there something that you don’t want to talk to your friends or family about? Is something keeping you up? Can you not hold it in any longer? If you are […]

Actress, award winning figure skater, fashion model, beauty, lifestyle blogger and social media star – who has time to do all of these things and do them successfully? The answer of course, is the multi-faceted, multi-talented, multi-tasking and mesmerizing German born Maya Antić. Could it be anyone else? We have seen her talented and extremely […]

Emyna TRQ has made a name for herself by creating melodic music that not only comes through with a message but with a rock anthem to hold onto as well as leaving listeners with something to think about. Her music is rock with a purpose. Emyna The Rock Queen has recorded new music with top […]