Shahid Kapoor, who is Bhardwaj’s favourite and has never worked with Nadiadwala, has also been roped in for the project which according to sources is a story of two friends who fall apart in the course of time. Saif Ali Khan is also expected to bounce back with producer Sajid Nadiadwala‘s espionage thriller Phantom which is opening in August. So impressed is Sajid with Saif’s dedication in Phantom that he has signed him to play one of the leads in a film that Vishal Bhardwaj will direct for Nadiadwala.Saif and Shahid will be required to undergo a period of orientation together, as they have shared a bitter past. For those who came in late Shahid was in an intense relationship with the current Mrs. Saif Ali Khan, Kareena Kapoor, when she went on a outdoor location with her co-star Saif Ali Khan to Ladakh. When she returned, everything had changed. 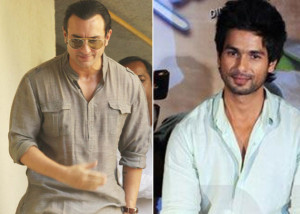 Aishwarya Rai Bachan,  is a regular at the  Cannes 2015 International Film Festival as part of her role as brand ambassador for cosmetic brand L’Oreal.According to reports the actress will be unveiling the first look of her comeback film, Sanjay Gupta’s ‘Jazba’. she will be part of a United Nations panel discussion on gender equality. […]

Bilal and Uroosa wed in Karachi on 14 February 2015, the event of Valentine’s day.Bilal Qureshi is Lahore based actor who now a days is quite popular in TV serials and performing lead roles like Menu ka Susral and Jevan Sathi .Bilal Qureshi and Uroosa Qureshi who were in a relationship are finally take the leap this […]