If you know anything about the history of Hollywood you know that thousands of people come there every year to try to break into the movie business. And you also know that only a very small percentage of those same people actually make it. That pattern has been going on since before 1920 and it looks like there is no end in sight. You have to ask yourself, however, why do the people who make it succeed in one of the most competitive industries on earth?

The answer is simple: they are prepared and they bring something to bargain with. If they want to be writers, they bring well-written scripts, if they want to be directors or producers, they bring samples of their work. In other words, they are not counting on hope and good luck for their future in the California sun, they are betting on themselves as a sure thing. Nichole Ruiz, for instance, came all the way from the Philippines to kick open the golden doors of the sacred town of Tinsel. What did she bring? She had the forethought to bring her degree from the prestigious New York Film Academy and she also brought her reel, which consisted of several award-winning short films that she either directed or was the cinematographer on. She was prepared to make it on her own and by her enormous talent and drive. 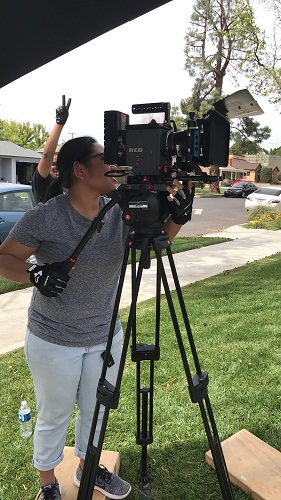 Nichole Ruiz was born and raised in the small Filipino town of Laoag in the northern region of the Philippines. She grew up watching movies and she tells us that it was Harry Potter who sparked her interest in filmmaking. She loved the whole process of making movies and when she got her own camera at an early age, she remembers that she and the image capturing magical device were inseparable. As she got older, Nichole got to work on movie sets as an intern with her best friend. That, of course, was what inspired her and cemented her path, so to speak, to enter the film business. She went to film school in Los Angeles and began working on other people’s movies and making some of her own.

She loves the art of storytelling and she also loves the art of cinematography, which she has gravitated to. She is enthralled with the limitless camera movements and the countless moods that movie lighting can bring about.  One of Nichole’s favorite projects was directing the film YOU. That film is doing well on the festival circuit and she is busy working on other films as we speak and developing projects for future shoots.

BARZZ.Net, is a leading online guide for bars and nightclubs nationwide, recently launched its highly anticipated mobile app where users can discover bars and specials in their local area for any day of the week. The location-based app, available in Google Play and iTunes as “barzz”, is a critical milestone for BARZZ.Net as a rapidly […]

You might remember Evan Golden from being the runner up on Ivana Trump’s Reality TV Show “Ivana Young Man” or the Spokesmodel for Universal Studios Orlando. Since 2012 Evan has been the on air reporter and host for Eye on South Florida TV Show covering red-carpet events for the film, fashion, entertainment and charitable arena. […]