Born in Guinea and raised in France, the performer was inspired from a young age through his love of soccer. It seems that being a performance artist was in his blood given that Abou Traore’s older brother was also a freestyle football (soccer) player. “He encouraged me to try and that’s how I got into football,” Abou recounts.

Freestyle football is an art of self-expression and Abou can perform countless amazing various tricks with any part of his body. Although it has been for over a century, freestyle football has enjoyed a surge in popularity in recent years as a result of global advertising campaigns and digital media sharing.  Despite such popularity, there are only a few dozen performers who have risen to prominence, and Abou Traore is among the true greats. Watching him perform is akin to watching one of the most talented contemporary dancers. 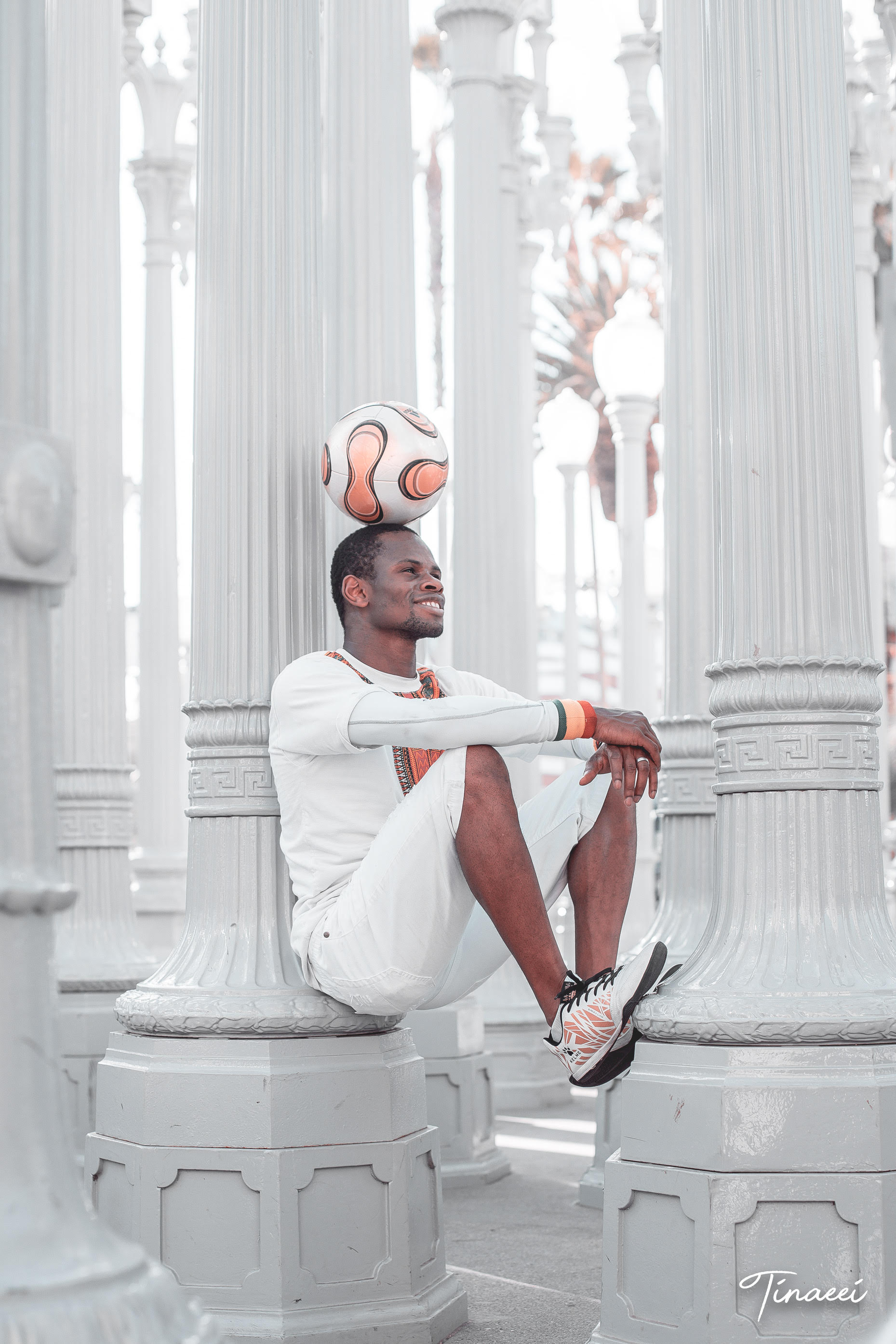 Abou began playing football at just four years old, in several clubs in Guinea and before moving to France when he was eight years old, where he continued to perfect his abilities. When he was fourteen, Abou injured his hip, which unfortunately ended his dream to become a professional player. But his determination to incorporate soccer into his future would not abate. After intense physical therapy and two years away from the game, Abou began training to become a freestyle footballer.

Driven to perfect his abilities, Abou began performing for crowds of people in Paris as well as elsewhere around the world. When videos of his performances went viral, he was discovered and selected to be a lead performer of a popular Brazilian samba performance troupe. Following such success, Abou began to be invited to perform on television shows airing in Germany, France, and around the globe.

Abou’s career continued to reach new and promising heights when he was cast in a major role in Cirque du Soleil show, Luzia.

“The first show was very stressful because it was the first time I worked with a big company like Cirque du Soleil. And there was significant media attention, so I couldn’t fail,” Abou shares. “The world premiere was on April 21st, 2016 in Montreal, Canada. I still remember how exciting it was that first night to be performing in front of so many thousands of people in such a beautiful show.”

For the past three years, Abou Traore has been living his dream and sharing his talent with the world. He stars in the captivating Cirque du Soleil shows  – entertaining audiences with visually stunning performances. As one of the most beloved acts, Abou has also been one of the major promoters of Luzia, appearing on popular programs like ‘The Late Late Show with James Corden’.

From the streets of France to sold-out performances on the world’s most popular stages, Abou Traore continues to follow his dreams and stay true to his motto: “There is no substitute for hard work. Never give up, never surrender and never stop believing.”

From the Congo to South Africa to Hollywood. It doesn’t sound like the normal route to establish one’s self in the entertainment industry, but is there really a normal route? There were a few other stops along the way for Gioya Tuma-Waku, but she didn’t let much get in her way on her journey to […]

This gentleman is literally changing the world day by day with his amazing mind set on business. He owns and operates 5 different companies and loves to help people. He is driven, dedicated & determined to bring peace, love & hope back into society. I’m honored to feature Casuel D. Pitts Jr. in this magazine […]

SHHHHHHHHHHHH!!!!!!! Don’t tell anyone!!!!!! JUST BETWEEN US Got somethings on your mind: Relationships, affairs, guilt, conflicts, marriage or divorce issues? Anger, shame or guilt Is there something that you don’t want to talk to your friends or family about? Is something keeping you up? Can you not hold it in any longer? If you are […]