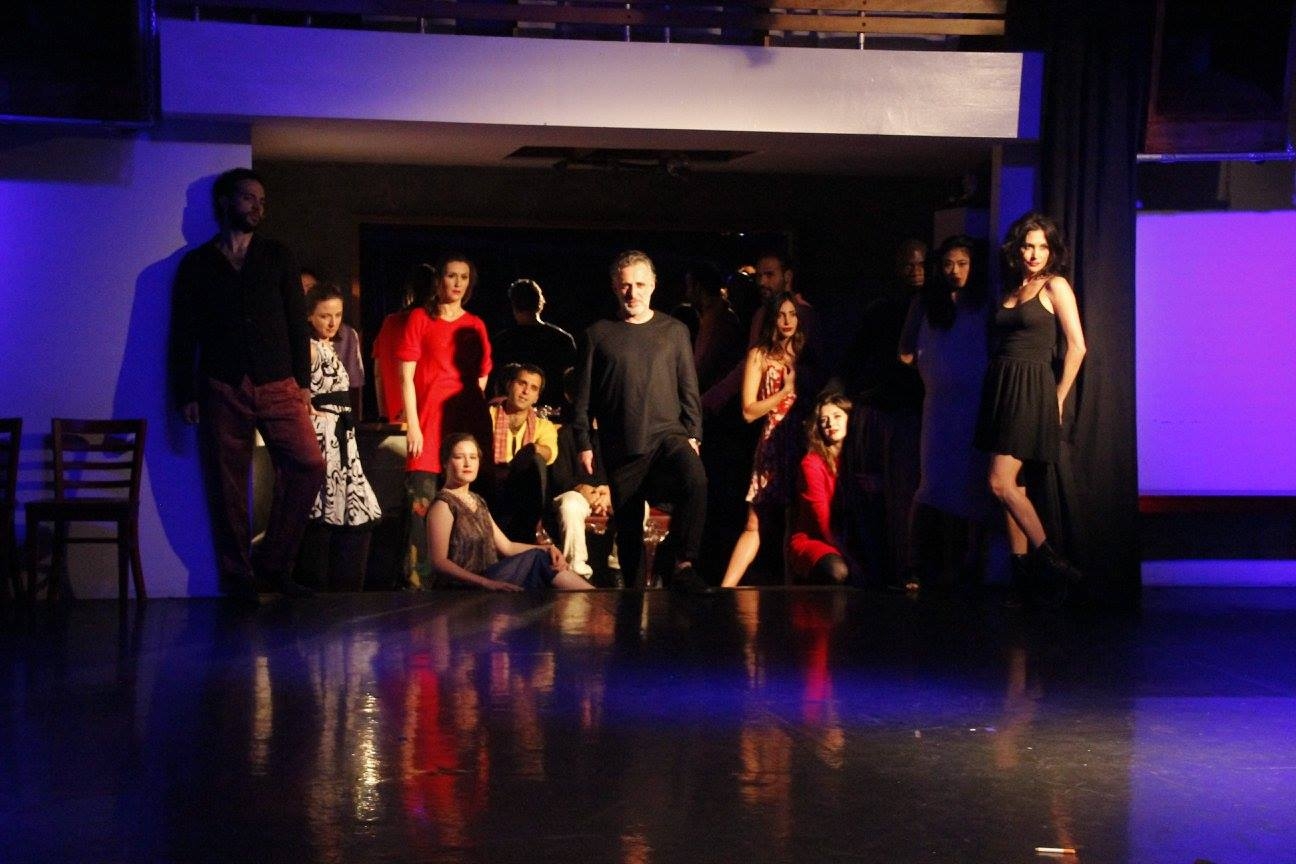 The LA based international theater company Jazzo has put together their biggest annual production and exhibited the company’s work on December 19th 2015 at Mimoda Studio. Conducted by Yasha Jacob Michelson, the company combines acting with movement and live music to create a unique theater experience. There were classically trained ballet dancers like Julianna Bulgarelli, Ottavio Taddei (also an actor) and Clarence Windel, as well as an amazing opera singer and well-known actresses Carina Haller and Nathalie Birmenns. With such a range of talent combined, the show was bound to be a success. Jazzo is the residant company at Mimoda Studio and has cast members from all over the world (Brazil, Italy, Japan, Mexico, Netherlands, etc.).

There is no plot, no real story being told, and yet, the performers were able to create moments of storytelling that felt like a dream or a memory. The synchrony between the performers is perfect as they followed the lead of Yasha Michelson in creating deconstructed forms with their bodies. This show was remarkable. The dance sequences with Mr. Taddei were stunning. His elegance and grace were captivating and he continued to mesmerize with his acting in the second half of the show. There was a moment when some actors were sat at their own desks with a few props and the mini scenes they created with them were phenomenal. There were four scenes happening simultaneously on stage, each lead actor (Carina Haller, Ottavio Taddei, Nathalie Birmenns and Clarence Windel) were sitting in front of a desk with a few props that they interacted with. Each one of the scenes was so well designed and executed with the rest of the cast that it was like magic for the eyes.

Mrs. Haller, who also dances, caught my eye with her magnetic presence and the quality of her performance. Mrs. Birmenns’s funny characters reminded me of Commedia del Arte and clown work, but in a whole new form. Yasha Michelson’s bodily freedom is wonderful, he calls himself a non-dancer, but he certainly has developed a way of moving that is his own and wonderful to watch.
Mimoda Studio is a busy center for the arts with weekly events in theater, dance, music and cinema. To learn more, visit www.mimodajazzo.com

Not just Salman Khan‘s family but also the rest of the film fraternity is in shock upon hearing that that final verdict in the hit-and-run case is against the Bajrangi Bhaijaan actor.Here is how Bollywood celebrities have reacted to Salman’s conviction in 2002 hit and run case Salman Khan Jailed | Industry In Shock by

The actor, who has appeared in nearly 100 Hindi-language films, was charged with culpable homicide and driving under the influence after crashing his SUV into a bakery in Mumbai. superstar Salman Khan has been found guilty of all charges in the 2002 fatal hit-and-run case that killed one person and injured several others. A judge […]

Incognido is intended to be a simple light weight inventory app for personality types. Also, like the logo suggests, you can choose to be anonymous by keeping the avatar we automatically assign you. At this stage, we assume you already know your personality type whether you have taken the MBTI™, Socionics Personality Test, or a […]