Urszula Makowska is a growing social media influencer, full time fashion blogger, and actress born and raised in the heart of New York City. Growing up in Brooklyn, she attended dance class for five years and completed her certificate in acting. As an actress, she is best known for my role on MTV’s show Catfish Season 5B Episode 1: Lucas & Many. Since the episode aired, MTV filmed a follow up with Urszula Makowska in February of 2017, adding the footage into the original episode.
Professionally, she graduated with a Bachelor’s of Business Administration degree in Visual Merchandising from LIM College in 2016. For years she has worked in social media and public relations. Today, she is currently working as a merchandiser for Full Beauty Brands and is working on her blogging career.

Urszulala formerly, launched as Fash Fab in 2012 by Urszula in the early development of her fashion career. Strictly, blogging about fashion at the time, she shared her daily fashion inspirations, outfits, and tips with viewers with hope of inspiring them with her taste. Through her blog, she has affiliated and partnered with major brands such as Aveda, NYLON, Amika, Christian Dior, LA MER, I SAW IT FIRST, Cartier, Estee Lauder, Givenchy, Daniel Wellington, and many other brands.

What was once known as Fash Fab, soon became re-branded to Urszulala. The blog took a step into the darker side of fashion. The darker and edgier look has grown the blog’s popularity. The bold eye brows and cat eyes are her signature look. Furthermore the blog has expanded into beauty, lifestyle, and travel that has inspired others.

The site has been featured from Elle PL, MTV, Huffington Post, Buzzfeed, and many other publications. 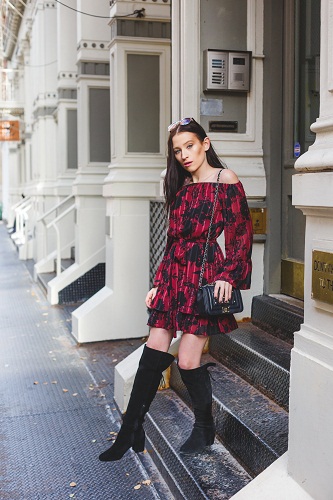 First of all tell us about the start of your professional career?

Professionally, I am a fashion blogger, influencer, actress and merchandiser. I first started to grow love for acting, growing up. At the age of 5, I was attending dance and art classes. I was very passionate about the arts and as a little girl I wanted to be on television, just like my favorite actors. At the time, I was absolutely obsessed with Lizzie McGuire. I looked up to Hillary Duff as my idol. During middle school, I had drama classes and that is where I really realized I love drama classes and just had to take acting classes. At the age of 14 I attended acting classes and completed my certificate in acting. From there, I met Linda Strobert through my acting coach Antonia Pettiford and began to book roles and network.

What attracted you to begin a career as an actor? Why do you feel this is the ideal profession for you?

I loved being able to play different roles. I loved the fact that I was someone I really wasn’t. I loved taking on different characters and bringing them to life. I felt free and creative. I loved working in front of the camera. It was my form of art and one of my biggest dreams. I truly think that this is the ideal profession for me because I am the type of person that is artistic and is able to take on any role or range of emotions. It’s also my dream and I am following my dreams.

How do you like to be managed? What sort of management style gets the best out of you professionally?

I like to be given the freedom and creativity. I love being able to have the power to work on things with others as a team to make filming a great success. I’m all about team work and bringing ideas to the table to strengthen our power.

What advice would you give to beginners who are nervous?

Don’t be nervous. In this industry you cannot be nervous. Let your fears go and be free. If you book it, you book it. If you don’t, then there will be plenty of opportunities to come. Don’t let you fear overcome you. Definitely walk into that room confident.
What’s your motto or the advice you live by?

Walking into that room and own it. I live by this because you have to be confident in yourself and love yourself. If you don’t, you will limit yourself. You want to break those barriers and limits. You want to succeed and you have to overcome your fears.
What was your most memorable performance to date?

I would definitely say my role on MTV Catfish. I have never done reality television before until my role as myself on MTV Catfish. It was a different experience than anything else I have ever done and I am grateful for all of the people I met off the show. They are kind and loving. They are like my family and I still keep in contact with them.

Since beginning your career tell me about a situation that has made you proud. Why was this, and what was the outcome?

I honestly cannot be any more proud of myself than going on national television to confront a catfisher that really hurt me in my personal life and other women. We stood of up for ourselves and hundreds of women that he has hurt and deceived. This person manipulated us and went to the extremes to call us a social experiment. He received explicit photos and videos of many of us and we were able to confront him on this and prevent other women from being emotionally damaged and deceived.  The best outcome of this was that I learned the dangers of online dating and mistrusting individuals online, but I also helped prevent other women from going through what we have. I always get messages about people being catfished and I always love supporting them and helping them get through it.

Who is your role model from within the Acting industry, and why?

I don’t have a specific role model, but I surely was obsessed with Lauren Conrad. I love her role on The Hills. I always wanted to be on reality television like her especially in fashion.

Feel free to check out my website urszulala.com or instagram.com/urszulala

Todd Barrow is making a name for himself as a country artist to watch. The Texas singer-songwriter has racked up more than a few accolades, from a PRSA Award of Excellence, an Akademia Award for Best Country Album, and an artist spotlight in Alternative Roots Magazine, American Pride Magazine and AVA Radio. He has appeared […]

Steve Crawford (DJ Energy), a producer based out of Arizona, has released new single “Rise featuring Lachi” digitally and on vinyl. The track, released by BeatyBoy Records on July 20, is a mix between R&B, jazz and deep house. DJ Energy brings together jazzy piano, and rhytmic rhodes improv over a solid deep house beat. […]

Q : Hi Fahmi Fauzi ! Can you give me a bit of info about your background? Did you study, and when did you start illustrating professionally? A : Hello, I’m graduated from University with Language Degree, but i take path what i always wanna be come, an Illustrator. I have been Illustration industry since […]