In our August story, we talk with Pokemon Go stabbing victim Chris Perguidi & he tells us about “Topher Thomas,” wrestling, acting,his stabbing , and  of course, Pokemon go. 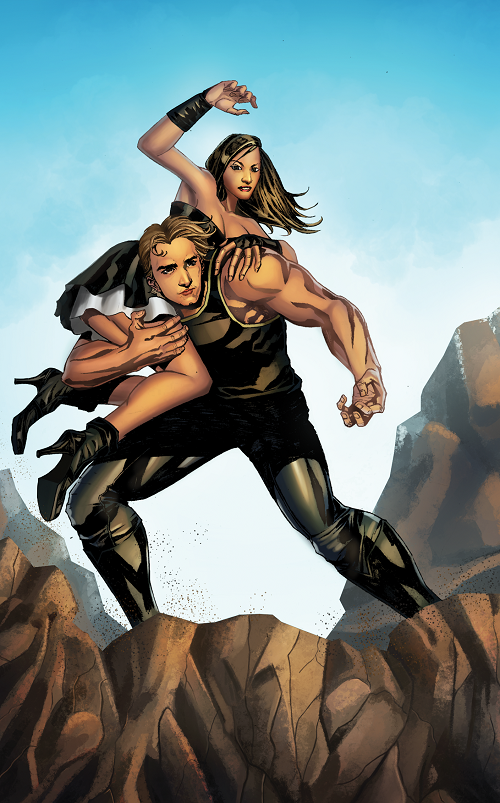 Story By Adam Hayes
Adam hayes : You were recently attacked while playing “Pokémon Go”. How are you feeling now? I’ve known you for a few years on social media and
know you have a special love for your face.

Chris Perguidi:
Confused . I just don’t understand why someone would want to stab me . They didn’t seem to have any clear objectives .
My face is healing well but I don’t think I’ll ever get used to the scars .Like you’ve said I’m a bit of a narcissist when it comes to my looks .
.
Adam Hayes  : A lot of people seem to think it’s your fault because you were not paying attention .how do you respond to that ?

Chris Perguidi:For the people saying we need to stay out of the “ghetto” I’d like to remind them this is where many of us go to school
and work . It’s not me who should get away from my work It’s the criminal element that needs to find a new place to play .
It is not the righteous man who should alter his way to benefit the unjust man . It is the unjust man who should change his
ways . I for one will not bow in cowardice to those who seek to take over and pervert our community . I have no vengeance
for those who attacked me and hope this event can end up helping the community and getting these people the help they need. 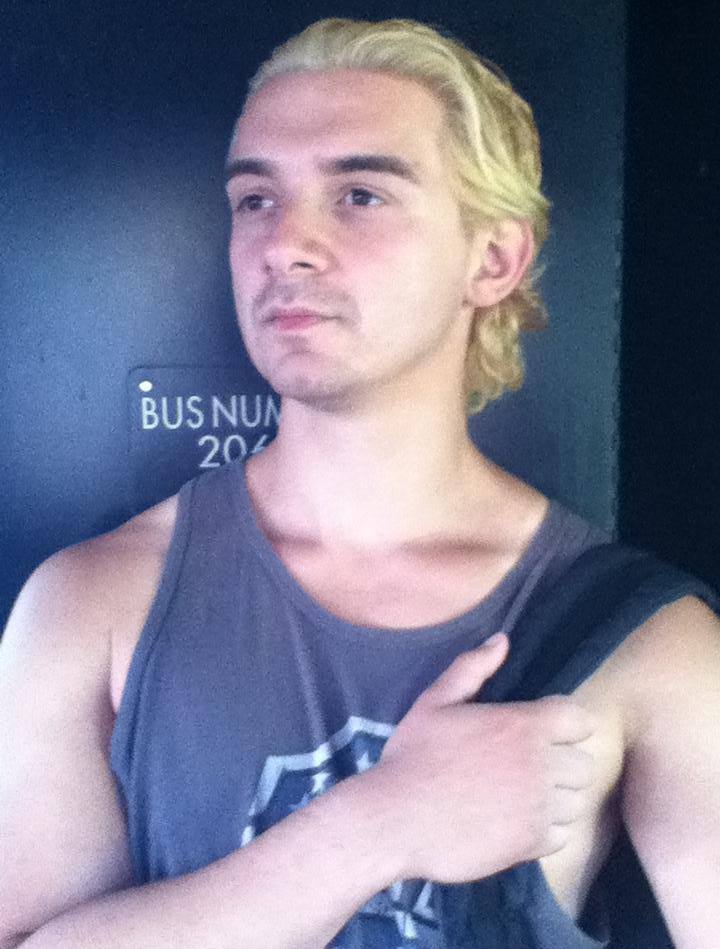 Adam Hayes: Still, Isn’t that a dangerous area to be playing a game ?

Chris perguidi : I wasn’t there to play a game I was waiting for my girlfriend to get off work .

Adam hayes : Why walk into to the women’s shelter and scare every one ?why not just wait for the ambulance where you were attacked ?

Chris Perguidi : I didn’t know I was stabbed . I thought the guy just punched me and the blood on me was his from the beating I gave him. I’m not the one who called the police or the ambulance .
I didn’t realize I was injured till some time later when I was told by some passing good samaritans .When I saw the hole in my shirt and the blood  I just wanted to see my Girlfriend one last time .all everyone wants to talk about is Pokemon and me getting stabbed .

Adam Hayes:  That’s kind of what you’re known for but let’s change the subject tell us about the start of your career in the Arts & Entertainment field ?

Chris Perguidi:
I started in the art Industry Working for my Mentors Allan Angel and Randal Vogel (who does a book called Rooni the Vampire)doing layouts for various comic books as .I started acting at a very young age
but shifted my focus from acting to art as I got older .I decided that it’d be cool to market
a comic about a pro wrestler and thought I could bring that character (Topher Thomas) to the real world by becoming him in the ring.I didn’t know It would be such an overwhelming success that it’s become .
People really like the Topher Thomas Gimmick. The original short film has over 10,000 views and was created by Sam Burks.

Adam Hayes : What was the inspiration behind becoming a pro wrestler?

Chris Pergidi :I was originally into acting but was told I was getting a little too rough looking (I.E Ugly) to reallyget leading man parts and  having trained in martial arts it  made sense to transition from
acting to sports entertainment .I like Superheroesso I thought “let me be a real life superhero !”So I developed The character Topher Thomas Who is getting his own comic book !

Adam Hayes : What kind of training did you receive  and who are your trainers?
Chris Perguidi :I trained in Tae Kwon Do with Jess Jacques and gained my black belt at age 18 ,later  I joined Pro Wrestling Revolution and trained there in Lucha and American-style  pro wrestling .My trainers were Vinny Massaro
,Kafu Santos and Robert Grays .After an injury to my hips, I had to take a break and My friend (kaka meng) from the comic book world invited me to train with him at BTW this actually led to me training with the UGWA  and living in the Owners house.Around  the same time I joined A.K.A to help rehabilitate my body and ended up making some life long friends .The Training at all the schools was
very intense , most people can’t handle it , but if you want to be great you can’t ever give up !

Adam Hayes : You also trained at PWR, American Kickboxing Academy, and Ugwa. How was your experience with these organizations?

Chris Perguidi:
PWR … Is one of the greatest wrestling schools in the world and I had a great time learning from everyone there .
They even made a short documentary that was shown on the Discovery Network . American Kickboxing academy was a whole other
ball game . I was training with ranked fighters and lifting weights with the guys who fight in the UFC ,guys that
could snap me in two with little effort ,really talented people .

Adam Hayes : You also appeared in television and short films. Do tell us more about that.

Chris Perguidi:Of course ! I had cameos in a variety of independent films including
wild and crazy,the beginning ,cinema insomnia ,Discover networks Crazyland,creepy Coffey,
first dog and a show called Harlem Knights (which appears on my IMDB) .
I was in a variety of commercials and have appeared in a variety of wrestling related programs in one form or another .
I also had a local cable show that ran for five years called the lizard Zone that can now be found on youtube .where we interviewed celebrities  and did comedy skits . I am Currently producing a horror film called The Boys of 2010.featuring The Famous meme creator James Myrick and Mister Lobo .

Adam Hayes : When did you start to create comic books?

Chris Perguidi:I’ve always made them , in a way , as a child, I’d make them in secret and one day while interviewing Allan angel for the Lizard Zone he convinced me to show him my work . He told me I was a genius and hired me on the spot to do layouts for his comic books .

Adam Hayes : What was the inspiration behind creating the comic character ‘Superhero Erika Amerika’ ?
Chris Perguidi:
I alway read the golden age superhero comics of the 1940s  and I would wonder “If the superheroes were fighting in world war 2 where are they now ?”
So, I came up with the answer  from a dream that their existence was covered up and they were all kept in a prison . Erika Amerika escapes
into our modern world ,the world that needs her more than ever because people don’t believe in heroes anymore ,I think we need
heroes more than ever  .

Adam Hayes: What has been one of the biggest achievements in your career so far?

Chris Perguidi:
I think it is still yet to happen  but training with the best and brightest in both industries is something I’m very
proud of .

Adam Hayes : So , not being stabbed while playing a phone app ?
Chris Perguidi:
no.
Adam Hayes : If you are asked to choose one, Wrestling or Comic Art. What would your choice be and why?

Chris Perguidi:
Comic Books . I think they encourage literacy and an appreciation for the arts .

Adam Hayes: Looking over to your career one can easily say you are very hard working and dedicated person. What’s the motivation behind your work ?
?
Chris Perguidi:I want to be an example of what you can do if you apply yourself . I want people to see me and think “I could do what that guy does .”
because I want everyone to achieve their dreams .
You can’t ever give up on your goals because you never know who is looking up to you for guidance .
I want my friends to do as well as me and even better !

Adam Hayes: Are you active on Social Media? How can you be followed online?

Chris Perguidi :  “Am I active on social media?! ” of course, I am that’s how we’re talking to each other .
I can be found on twitter at
https://twitter.com/chrisperguidi and facebook at https://www.facebook.com/ErikaofAmerika

We are sharing our interview with Herlens “Freezzy Brickz ” Suffrin, the owner of sky Burg Records. Celebs Fans : Our readers would like to know about the start of your music career. Freezzy Brickz : Since I was a child I always liked music, and been my passion, my dad put me in a […]

Twmmy (Thomas P. Albanidis) is a greek artist, singer, and music covers maker. He was born in 14th of May 2002 (15 years old) in Komotini,Greece Q: First of all tell us about the start of your professional career? I started singing when I was 12. But professionally, I launched my career when I was […]