THE MAN WHO CAN MAKE YOU CRY & SMILE: INTERVIEW WITH ASIER KINTANA

Asier Kintana just finished, with great success, his one man show in NYC, Chaplin “Behind the Character”, directed by Susan Batson.

First of all congratulations on your show and the great success you had. Let’s start with simply how you got involved with this project.

AK: Thank you. I was training at Susan Batson Studio and Susan offered me the chance to portray Chaplin in a one man show. Needless to say, I was very honored. There are few people in the world that do not know who Chaplin is and it was a huge challenge. I read a lot about him and underneath the character I found a pure heart, and an extremely sensitive human being. We all know about Chaplin’s movies and about his talent as an actor, comedian, director, etc. But what I found really fascinating was his soul and that really trapped me.

Explain this to me…A Spanish actor playing a British character in English, dancing, singing, imitating accent, doing acrobatics, Hitler, Chaplin… in an Of Broadway one man show with one of the most famous acting coaches in the world (Susan)… I knew you have talent but it seems you have more than one!!

AK: Ha, ha…Maybe, ha, ha…Thank you. More than “talent”, it´s a kind of “skill”, then you develop it over the years with work and passion. But thank you anyway (laughs). It was a hard work to develop the choreographies (tap and waltz), train the voice and to adjust the accent but it was required in order to play such a big star like Chaplin. He was a genius in everything he did so I had to be also. And then, of course, Susan after me…haha, exhausted! But that frustration I felt, the anger I went through, the pain I suffered as a result of not being great, got me closer than ever to him. Especially in those hard moments I really felt his heart beating inside me.
Did you have him in mind when Susan offered you the character?

AK: There was another option, Hitler. It’s funny because you may not know that Chaplin and Hitler were born in the same year -1889- in the same week -Chaplin 16 April, Hitler 20 April. And one of the scenes in the show is about The Great Dictator where both are involved. Once Susan offered me the Chaplin character, I researched everything about him. I realized I could completely understand his pain and that gave me a kind of confidence. But for sure, it was the passion when reading him that hit me. The way he did everything in life, the passion he had and how he fought not only for his art but also for the human being.
So did that give you access into the character?

AK: Absolutely. If you look for a key into the character at any time, it is his heart. It’s curious because we think that all human beings are different from each other, that different emotions and events happen to us but… one day you study such a huge icon and you discover you have more in common than you thought. What I mean is that behind any character, no matter how big or famous he/she is, there is a human being like us. Then, work and passion make the rest. You have to love the character you play or at least find something in the character that you love. Then it’s just a “journey,” like when you fall for someone and you do things you never would imagine you could. That’s when the creativity pops and you fly.
At school, watching Chaplin movies I’m sure must have been something that influenced you. What was your relationship with those movies?

AK: True but what you see in his movies is the “result” of his life and professional journey. What I mean is that everything Charlie did was because of his childhood and his parents, especially his mother. You don´t wake up one morning and say “I’m going to create a masterpiece.” He needed to release all his pain, his sadness, his solitude and the way he found to do that was through the movies. Of course, you need the talent he had but that alone wouldn’t have done it. Think of it this way, he was abandoned by his mom when he was eight years old, he was by himself in Victorian London; hungry, alone, with an alcoholic father… all that created Chaplin! Charlie is the greatest example of the resilience in the world. Knowing that many comedians committed suicide, creativity saved him from a certain death.

But you also played Hitler masterfully in the show. On the one hand there’s Hitler, probably the most hated character in history. On the other hand, Chaplin, who is an icon and the most beloved character ever. How did you take these characters on?
AK: Once you understand you must love something in every character you play, Hitler was easy because it was Hitler through Chaplin’s eyes. So I had the freedom to go as far as I wanted, taking into account that it was inside Chaplin’s world. 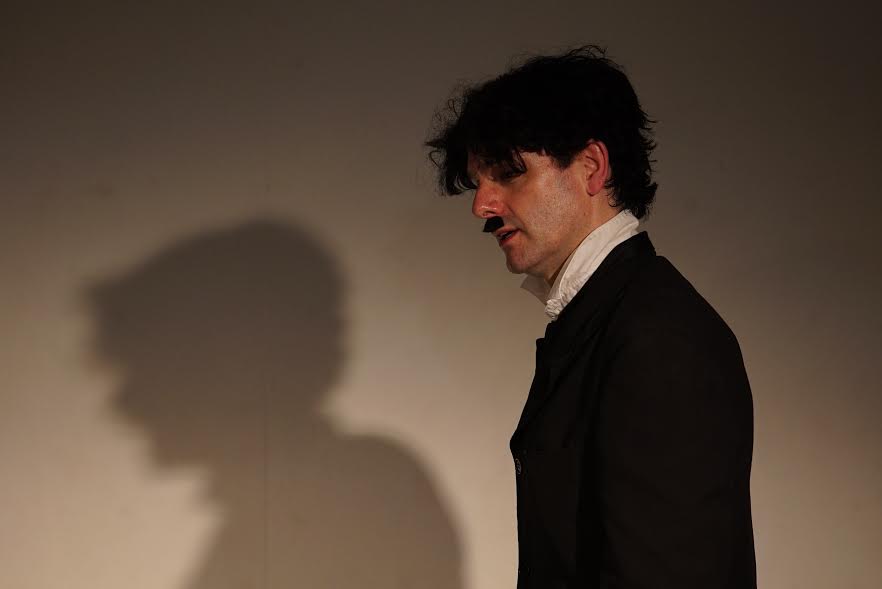 What did Chaplin teach you that you didn’t know?

AK: Love, Passion, and Genius. Of course I knew about those three elements but Chaplin taught me the real meaning of them. He worked on behalf of the dispossessed, giving away all his love and creating a smile in each of his films. He didn’t want anybody to go through what he had gone through. He did everything with passion, no matter what, and that built his genius. In my opinion he was a man sent by god in order to heal the pain of humanity. He still does this to this day.

Susan Batson couches actors like Nicole Kidman, Juliette Binoche or Tom Cruise, and she has a lot of faith in you as an actor. What was it like working with her?
AK: Wonderful, amazing, challenging, limitless… She has a gift from god to see your soul and demolish any kind of barrier you have as a human being that is stopping you from being the greatest actor you can be. But don´t think she is nice to you, I mean, she is going to push you to your limit, because she thinks no actor has limits, and at times it was painful, as life itself.

But do you think you’re drawn to parts that scare you? You’ve mentioned your work with Susan has been challenging to say the least.
AK: Sure. You can´t play a character, like Chaplin, without facing your own demons and that’s scary. You have to go down to your dark room, look them in the eye and say: “Hey buddies, we are here together, we know each other very well but we have to carry this project ahead no matter what.” And believe me, this is scary.

Are you able to leave behind a character like this at the end of the day?
AK: I try to, haha… but it is really difficult! Actually I had to keep myself emotionally open and living in a tough city like NY that’s almost impossible! I made more effort to keep myself open than to create the show. Susan pushes you to the core of the character’s soul and when you are not there, the character is empty for her. So you constantly have to be open and creative.

Thank you and I wish you the best in your future projects.
AK: Thank you very much

Her face pretty much says it all. Or should we say: her pretty face says it all? Either way you put it, once you see Nigina Niyazmatova’s face you realize that she means business. She has a lot of sensitivity beneath that full head of long flowing dark hair, but her eyes will also tell […]

Brat Productions is one of those production companies that is highly creative in a very quiet way and then they end up with a number of hits on their hands. One of the web series they produce is Chicken Girls, and it has gone viral. The YouTube show has a lot of great stories and […]